WATT (Energies Corp) popped up big after hours on on December 26th on news of a new technology they are making progress on. Quite frankly it doesn’t matter what the product is as long as the stock is showing volume and range, which it did after hours.

On the open you can see weakness that forms into a consolidation. Normally we get very bearish when a 1 day VWAP is broken to the downside on a stock thats gapping up. This still holds true in this scenario but you need to be aware of the potential significance of the one day in this particular scenario. Since WATT is such a lightly traded sock and the news so powerful, the one day and intraday VWAPs will be almost identical, thus the one day may hold less significance on day one of this move.

WATT at this time had a large short interest 20-30%. This is something you must be aware of. A large short interest can make a stock whip in both directions, but most importantly it can make it prone to a squeeze. Consider how you would feel if you were one of the shorts holding into this news. You’re most likely looking to cover to avoid getting steamrolled. As long as there is a clear top and lower lows are being made, you can feel safe that you may get a chance to cover lower at less of a loss. As a trader you want to be aware of this, as soon as lower lows stop being made, shorts may look to get out and the squeeze is on. Intraday and one day VWAP convergence here is providing us with a clear level to get long from once the higher low is made. From there you can see how the panic sets in and shorts can’t cover fast enough.

On day two of the move, we get more squeeze premarket followed by a consolidation, light breakout, and two nice T1 opportunities during the regular session. At this time your eyes should be on that double top at 33.50 where very heavy sellers appeared twice.

Day three we are now working with a few multi day VWAP’s that hold significance. As the 33.50 highs reject premarket, we see the one day VWAP broken, this is a very bearish sign, and if your aggressive, a short opportunity. Two more T1 opportunities followed in the morning which guided you into a beautiful breakdown below prior days support. From here, there was no reason to cover until we see the 2 and 3 day VWAPs providing heavy support. We talked earlier about why these VWAPS are so close in value and can be treated as one VWAP.

From this multiday bounce we find ourselves at another T1, less clean but still juicy as can be. To trade this T1 need to take into account the level earlier in the day and give some room in that area for sellers to join. This would have funneled you into the multiday VWAP break and pure destruction into the close.

Day four we can look to get short at that big multiday level, which now includes the 1, 3, and 4 days vwaVWAP converging in one place. If your playing it hotter term you can cover near vwap. If want to hold for a bigger move you can cover half at vwap and reload when it makes a higher low under the half number at 24.50. Holding for the move you’ll need to do your best to almost ignore that intraday VWAP. A good mindset to have in this case is consider which VWAP should hold more weight: the VWAP from the very start of this whole craziness, or the intraday VWAP on from the morning on day 4? 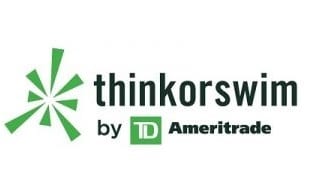 The code was originally written on ThinkOrSwim and is natively designed for this platform. Every indicator mentioned in the gallery below is available and accessible on ToS. Please note that the platform is free, and you do not need a funded account to access their real-time charting data. 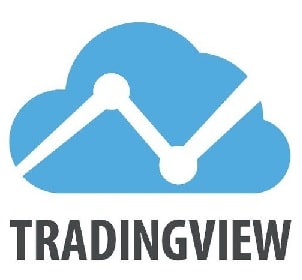 For traders unable to use ThinkOrSwim due to country restrictions, we’ve been able to replicate some of the code on TradingView’s free charting software. VWAP Intraday, DateVWAP, and a limited version of Event VWAP are available. The strategy can still be successfully traded using this platform, but some of the features shown in the gallery below will be inaccessible. 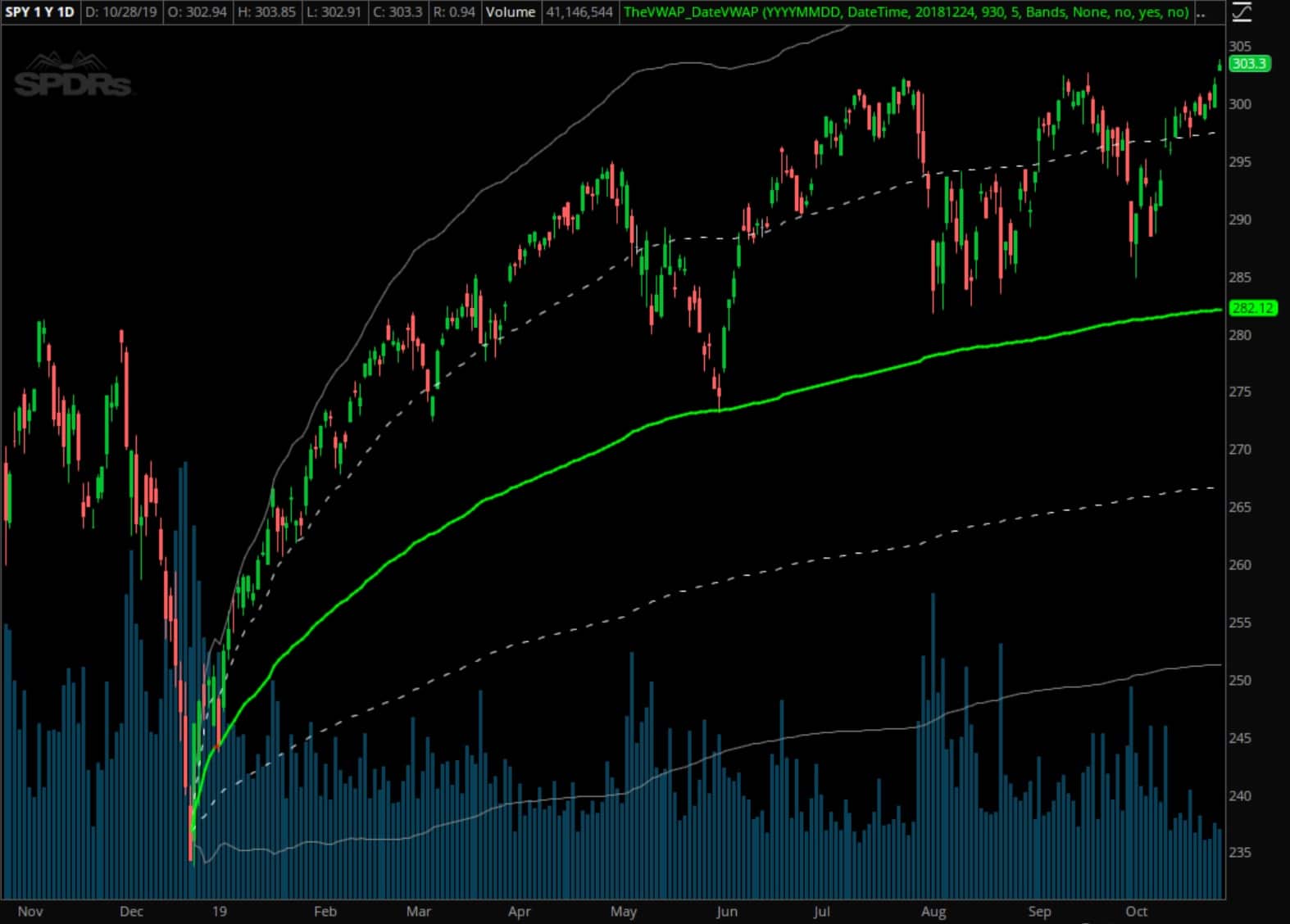 This VWAP initiated on 12/24/18 allows us to track the cumulative average price of SPY from a significant swing low, which served as crucial support on 6/3/19 in the midst of a deep pullback.

The addition of deviation bands can help provide additional context as we move farther away from the average, but these can also be removed in the study settings if you’d prefer to simplify.

Barring holidays or other extenuating circumstances, sessions will be held on Mondays and Thursdays at 4:30pm ET for four consecutive weeks. You’ll receive an email prior to your selected starting date that outlines the projected schedule for that particular month.

All sessions will be recorded and posted to a private gallery, and you’ll have the opportunity to submit questions in advance of Q&A sessions if you can’t attend. 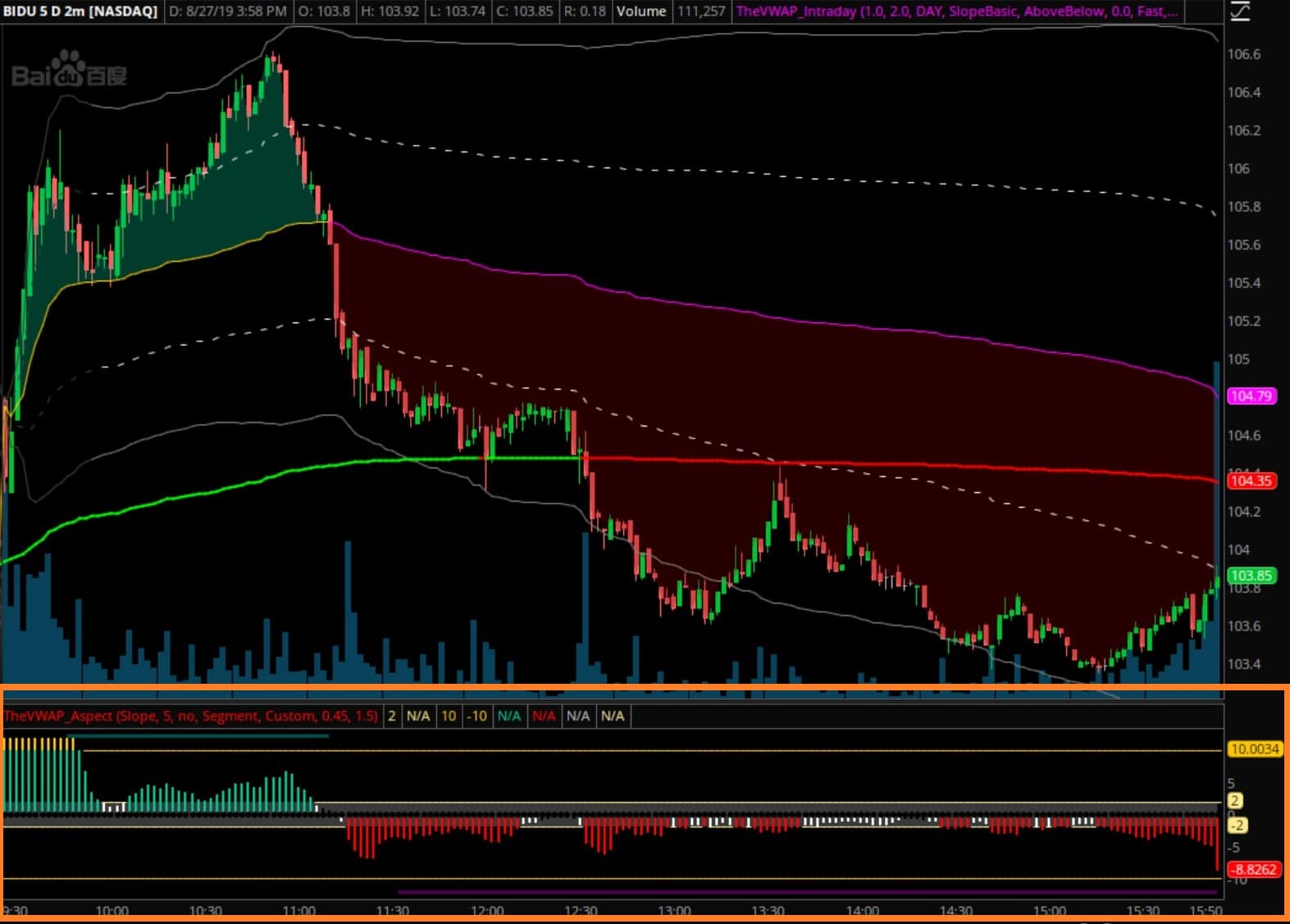 Highlighted at the the bottom of the chart, Aspect showcases the shifting price action on BIDU and continually gauges its intensity. When used in conjunction with intraday signals it can bolster our conviction on most setups. 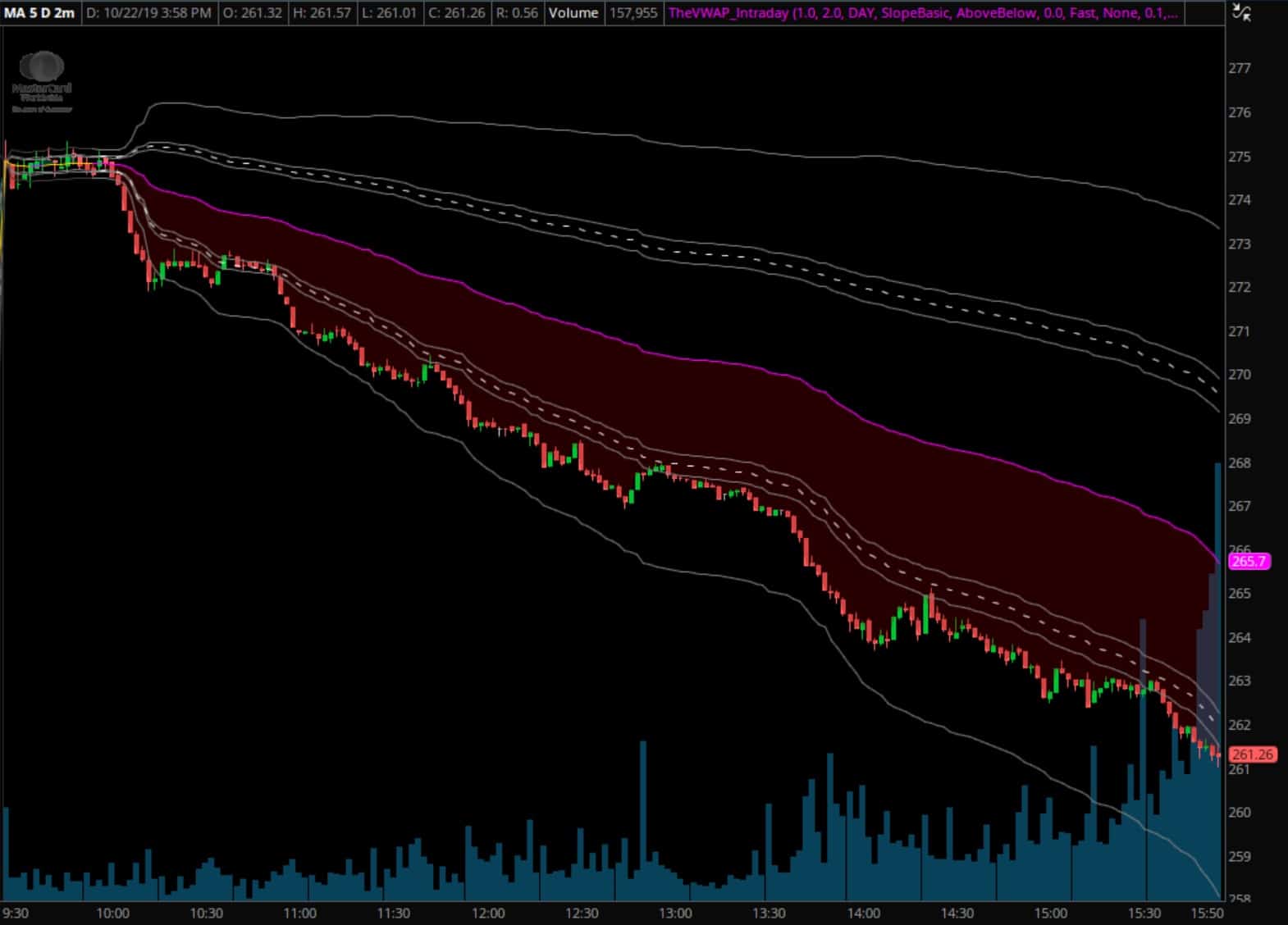 VWAP Intraday is the backbone of our strategy, revealing areas of support and resistance on charts like MA that would otherwise remain hidden.

The dotted lines represent the +1 and -1 deviation bands, and the solid lines bordering them are customizable tolerance bands that can be either removed or widened to align with your preferred style. 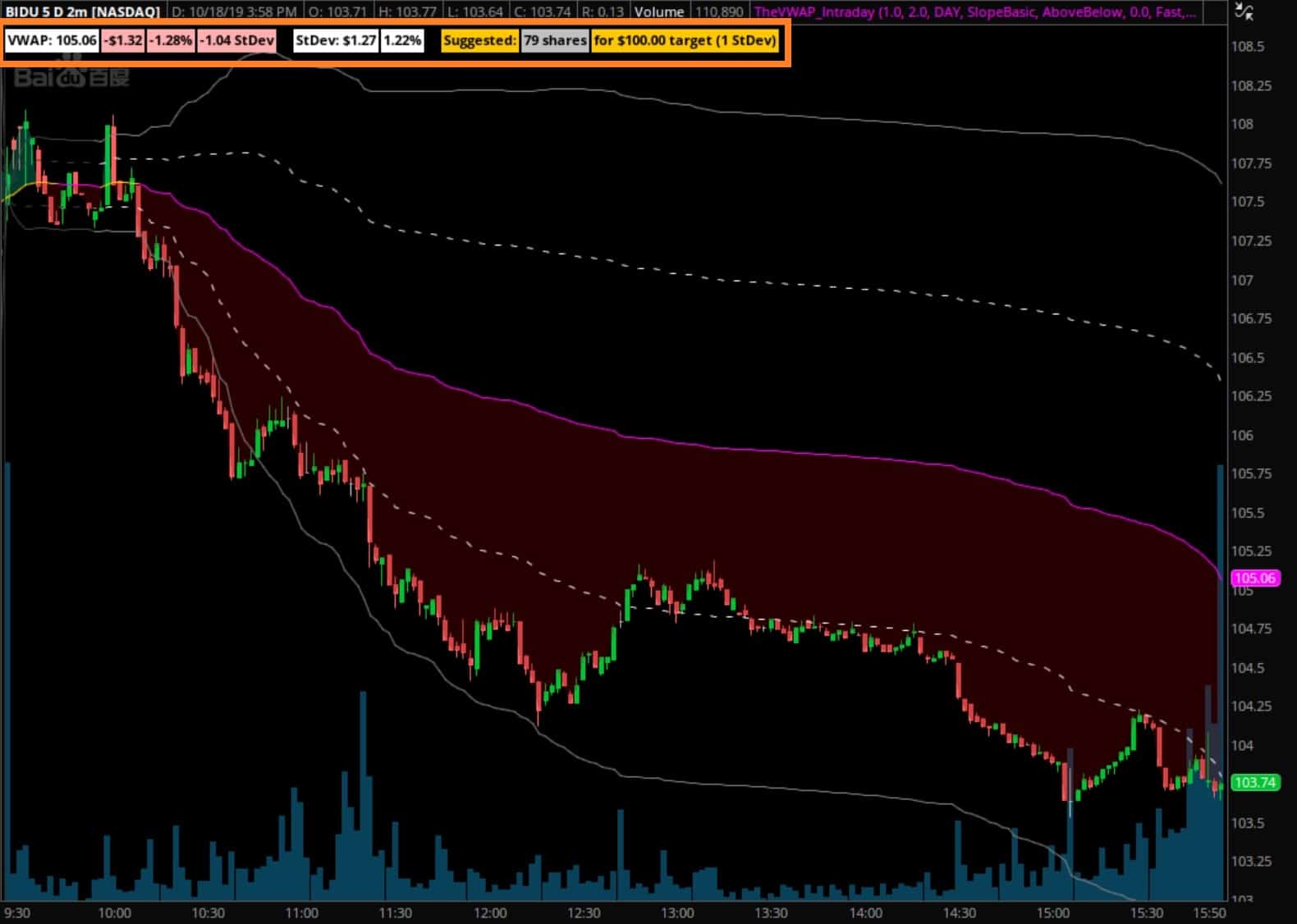 Located in the upper left corner, Dashboard allows us to quickly assess a chart’s volatility and its position relative to VWAP.

Each metric can be hidden if you’d prefer, and the position size calculator is customizable to fit your particular parameters of risk and reward. 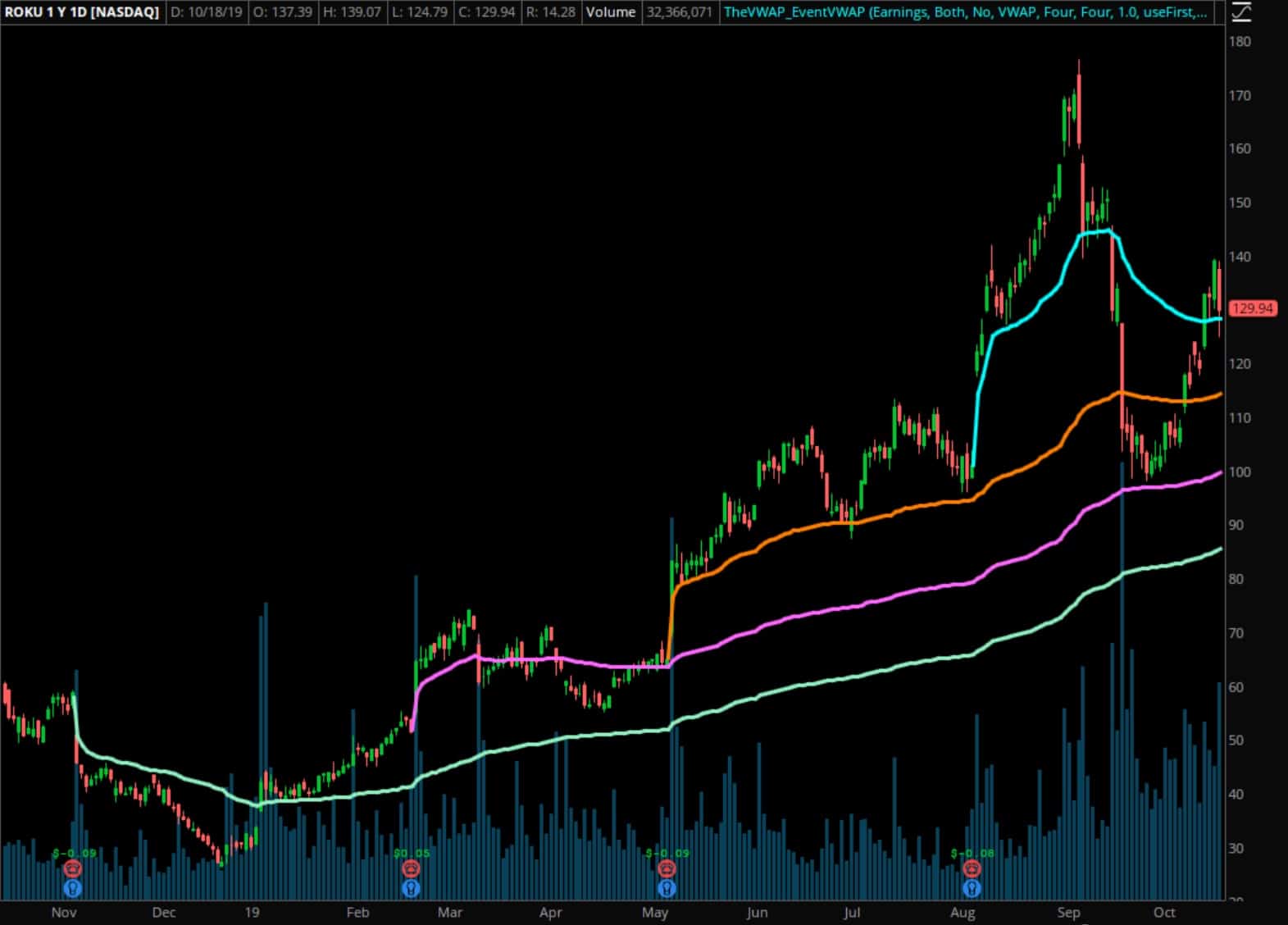 This daily chart of ROKU shows Event VWAPs anchored to its last four earnings announcements. Collectively, they served as key areas of both support and resistance even months after their initiation.

Color, width, and style are all completely customizable. 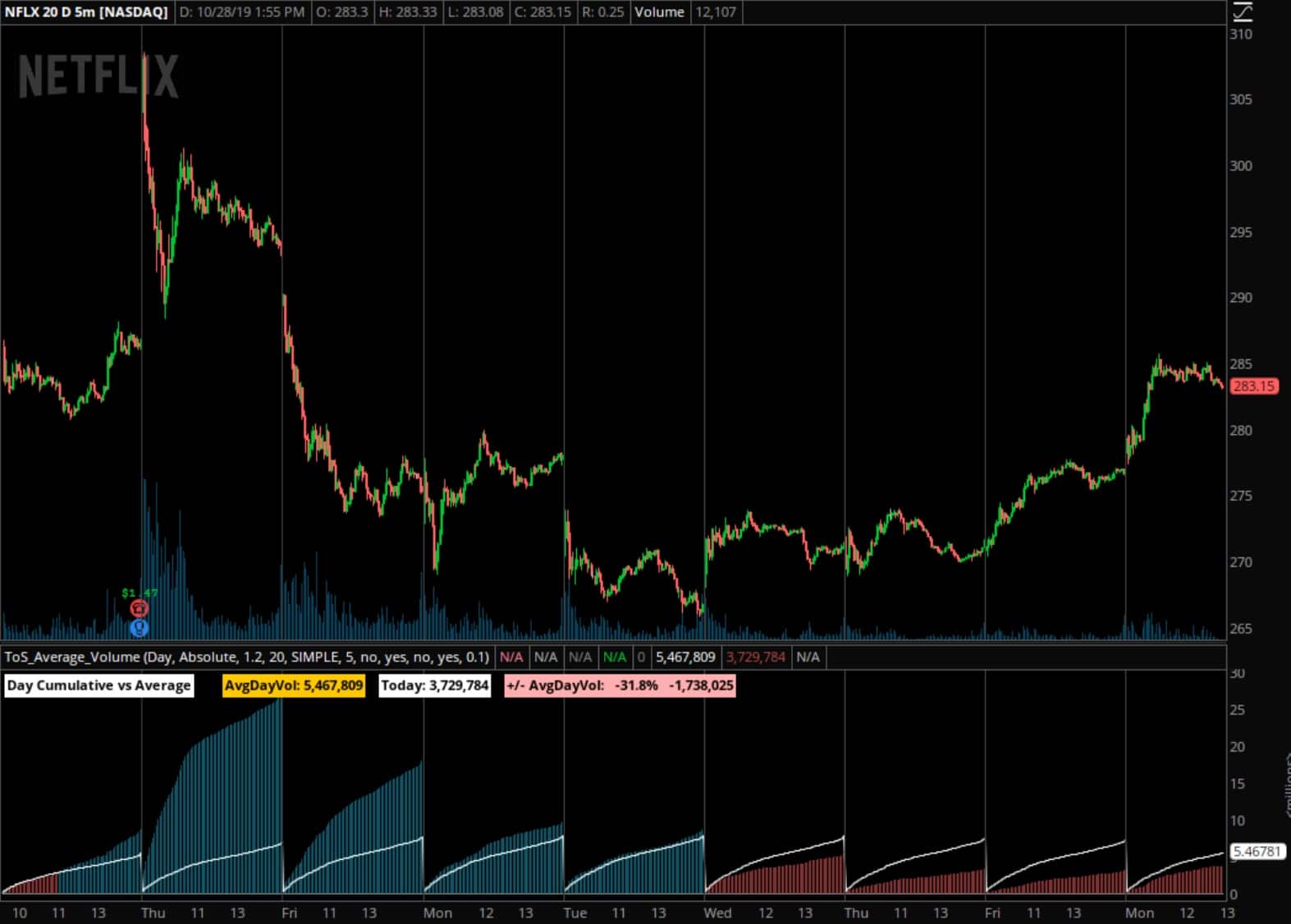 On this 20 day, 5 minute chart of NFLX, note the blue visual highlighting when current volume is ahead of volume ‘pace’ (white line), with red highlighting applied to areas below average volume at any given time.